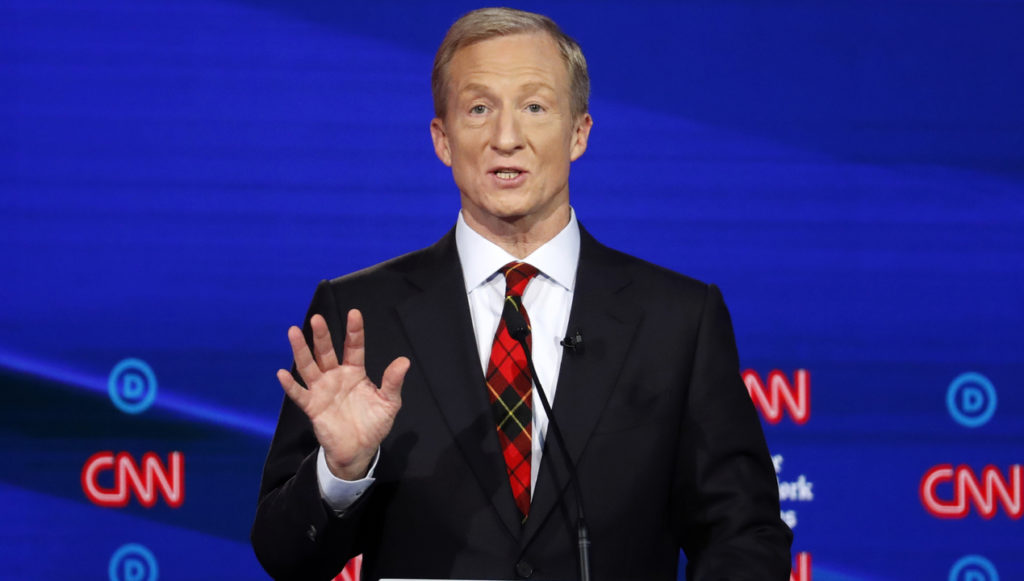 Democratic presidential candidate and billionaire Tom Steyer, an advocate of higher taxes on the rich, would have owed an additional $136 million in federal income taxes had the Millionaires Surtax recently introduced in Congress been in place over the past decade. That hefty hike in the taxes paid by one of the nation’s richest men shows the Millionaires Surtax—a relatively simple change to the current tax system—would begin to ensure the rich pay their fair share.

The Millionaires Surtax, proposed by Sen. Chris Van Hollen (D-MD) and Rep. Don Beyer (D-VA), would add 10 percentage points to the top income tax rate paid on income over $2 million for couples and $1 million for individuals. Though affecting only the nation’s 0.2% richest taxpayers, the surtax would raise an estimated $635 billion over 10 years, according to the Tax Policy Center, money that could be used to expand healthcare, improve education, repair infrastructure and make other vital public investments.

Steyer had almost $1.4 billion in total adjusted gross income (AGI) over the 10 years (2009 to 2018) as shown by the tax returns he has released (see table below). One of the attractive features of the Millionaires Surtax is its simplicity: calculating Steyer’s additional liability under the Surtax just means subtracting the total of $20 million of income that would have been exempt over those 10 years ($2 million on each of 10 joint returns), then applying the 10% surtax to what’s left. The result is nearly $136 million in additional tax due. 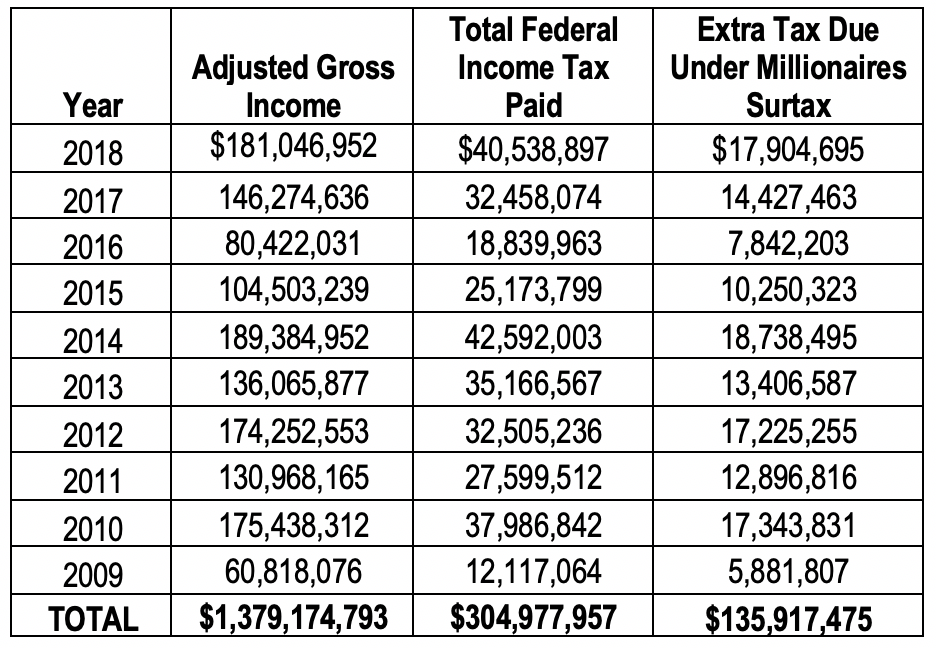 “The robust effect the Millionaires Surtax would have on the tax liability of one of the nation’s richest men is a good illustration of how effective this simple reform would be in ensuring the super wealthy pay something closer to their fair share,” said Frank Clemente, executive director of Americans for Tax Fairness.

Under the Millionaires Surtax, Steyer’s average effective tax rate over those 10 years would have jumped from 22.1% to 32%—still below the top federal income tax rate of 37%, which was the rate applied on joint ordinary income above $612,350 in 2019. Ordinary income is mostly wages and salaries, but also includes most kinds of investment and business income.

Such a substantial increase in taxes owed is only possible because of another strength of the Millionaires Surtax: it applies to all types of rich people’s income. That’s important because two types of investment income—types that the wealthy receive a lot of—are taxed under a separate system from the one that taxes work income. The separate system is unaffected by rate hikes on wages and salaries, so any attempt to effectively raise taxes on the wealthy that doesn’t cover all kinds of income will fail.

For instance, Steyer did not earn any of his income over those 10 years from his job. Instead, over 60%, or some $860 million, came from the two types of investment income—qualified dividends and long-term capital gains—heavily drawn on by the wealthy and taxed under their own lower rate structure. The rest of his income comes from investments taxed under the regular system. [See table] The Millionaires Surtax would apply to all this income.

Steyer has not taken a position on the Millionaires Surtax. He has proposed a wealth tax on fortunes over $20 million and eliminating the tax discount on the kind of investment income predominately enjoyed by the wealthy. Steyer has also proposed restoring the corporate tax rate of 35% in effect before the 2017 Trump-GOP tax law cut it to 21% and strengthening the estate tax.