and Explain How They Would Invest the Added Revenue

WASHINGTON, D.C. – As the first Democratic presidential debates get underway this week, Americans for Tax Fairness Action Fund today launched a website detailing the tax plans or proposals of each candidate. Wealth taxes, higher capital gains taxes, stronger estate taxes, higher corporate tax rates, financial transaction and carbon taxes, and EITC and Child Tax Credit expansions are among the reforms detailed on the website, broken down by candidate and type of tax.

A one-page summary of the candidates’ major positions is available here.

In many cases the tax proposal is accompanied by an explanation of how the candidate intends to use the additional revenue, such as for improved healthcare, education, infrastructure and environmental protection.

“It’s surprising that this early in the 2020 race tax policy is emerging as a key issue and a defining one for Democrats,” said Frank Clemente, executive director of Americans for Tax Fairness Action Fund. “The utter failure of the Trump-GOP tax cuts to live up to the promises of more jobs and higher wages has given the candidates an opening to propose major tax increases as part of their campaign platforms. Virtually all candidates are saying they want to repeal or significantly roll back the Trump-GOP tax cuts.”

The website offers formal tax proposals where they exist, but also more general statements on tax policy. Major themes that are apparent from the plethora of proposals: 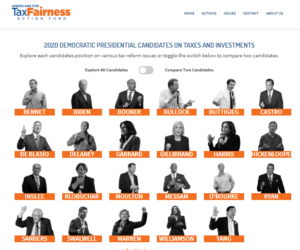 “One is the failure of the Trump-GOP tax cuts – the Tax Cuts and Jobs Act (TCJA) – to live up to its promises to raise wages, create jobs and increase business investment,” he said. “Voters were never keen on the tax cut law, and polls continue to show that they believe (correctly) that it mostly favored the wealthy and big corporations and did little for them.

“Second, candidates are much more aware that voters strongly favor taxing the wealthy and corporations, as indicated by our polling compilation. Most voters don’t believe in the magic—and fake—elixir of trickle-down tax cuts.

“Third, voters are demanding much greater investment in public services—from affordable healthcare and childcare to improved housing and education; from rebuilding infrastructure to addressing climate change—and they want to know how candidates will pay for it all.

“These factors have combined to create an environment in which candidates—far from having to shy away from the tax issue as in past years—will actually be rewarded for proposing major tax increases on the wealthy and corporations and using the money to pay for vital public investments.”

The ATF Action Fund presidential tax plan website presents the information voters need to evaluate each candidate’s tax and spending proposals and compare them to those of others. The website will be regularly updated as campaigns release further tax and investment proposals in the future.

Americans for Tax Fairness Action Fund is a fiscally sponsored project of the Sixteen Thirty Fund, a section 501(c)(4) non-profit organization. ATFAF is related to but should not be confused with Americans for Tax Fairness, which is a project of the New Venture Fund—a section 501(c)(3) non-profit organization.