Democrats being clobbered in the Congressional midterm elections by Republican TV ads on economic issues are failing to adequately fight back even though they have available to them effective, poll-tested responses. That’s the conclusion of an Americans for Tax Fairness Action Fund (ATFAF) report after reviewing 351 ads aired over the last three months by Democratic and Republican congressional candidates in very competitive races and by their parties’ congressional super PACs.

Democratic ads made up 57% of the total ads analyzed but just 30% of those on economic issues. And even when Democratic forces did address economic issues, it was not to counter GOP claims or promote the many popular features of the IRA. Instead, in Senate races Democrats and their congressional super PACs focused their advertising on jobs/supply chain/outsourcing and on prescription drugs, Medicare and Social Security. In House races, the economy message for the Democratic congressional super PAC was focused on drug prices, Medicare and Social Security. Many of the Democratic economy ads—particularly on Social Security and Medicare—did not appear until mid-October, in a scramble to correct for the earlier message miscalculation.

Below are more details on findings from the TV ads broadcast from August 1 to October 27, (also available in the table on the next page):

Senate candidates of both parties ran a quarter (24%) of the “economy” ads—51 of 216. These were divided almost equally: 25 for Republicans and 26 for Democrats. (Due to their large number, House candidates’ ads were not analyzed.) 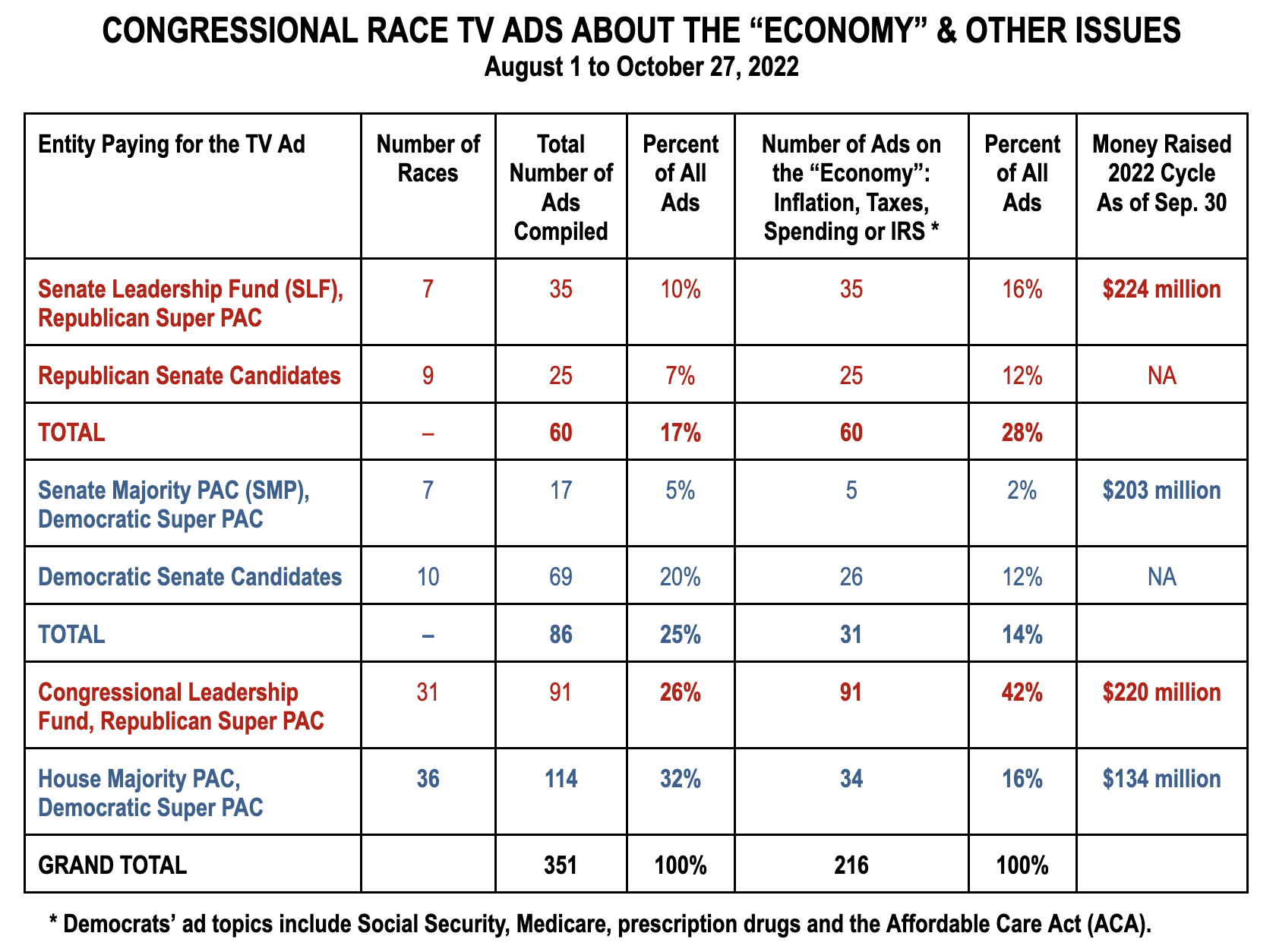 Undoubtedly because of its long and tortured path to enactment, the IRA is not familiar to most Americans. But a recent poll by Biden pollster Impact Research for ATFAF and its sister organization, Americans for Tax Fairness, that oversampled pure Independents found that once voters are told what’s in the new law, 70% of likely voters—including nearly all Democrats, two-thirds of Independents and even a plurality of Republicans—approve of the IRA. Particularly telling is that the tax reforms making the rich and corporations pay a fairer share are about as popular as the prescription drug reforms, especially with swing voters. The poll tested numerous compelling messages Democrats could use to energize voters and to effectively counter GOP critiques.

“Democratic ads have mostly focused on threats to abortion rights presumably because polls show that message resonates with both the party’s base and with swing voters,” noted Frank Clemente, ATFAF’s executive director. “But failing to also prioritize economic issues when inflation and other pocketbook issues are uppermost in voters’ minds is a major mistake.”

“Democrats fought hard the past two years to secure legislation addressing the economic issues that now animate voter concerns and Republican advertising,” Clemente said. “We’re not questioning the choice made by individual Democratic candidates and their super PAC supporters to air TV ads on topics that they felt best undermined their opponents or showed the Democrat in the best light. But we are critiquing the failure of Democrats more generally to create ads that draw a contrast with Republicans on which party is doing more to address the economic concerns of working families. It’s clear from the polling that Democrats can win that debate—but only if they raise the issue.”

We have seen only two TV ads  one TV ad this cycle making this case against big money special interests and about taxes. One is by Sen. Chris Van Hollen (D-MD), former head of both the House and Senate Democratic campaign committees. Another ad is by Rep. Mike Levin (D-CA) in a “frontline” race. The progressive populism both ads are similar to that proposed by legendary pollster Stan Greenberg in this video: The Economic Argument That Democrats Aren’t Making—But Should!

The full report with all the ads compiled can be found here.