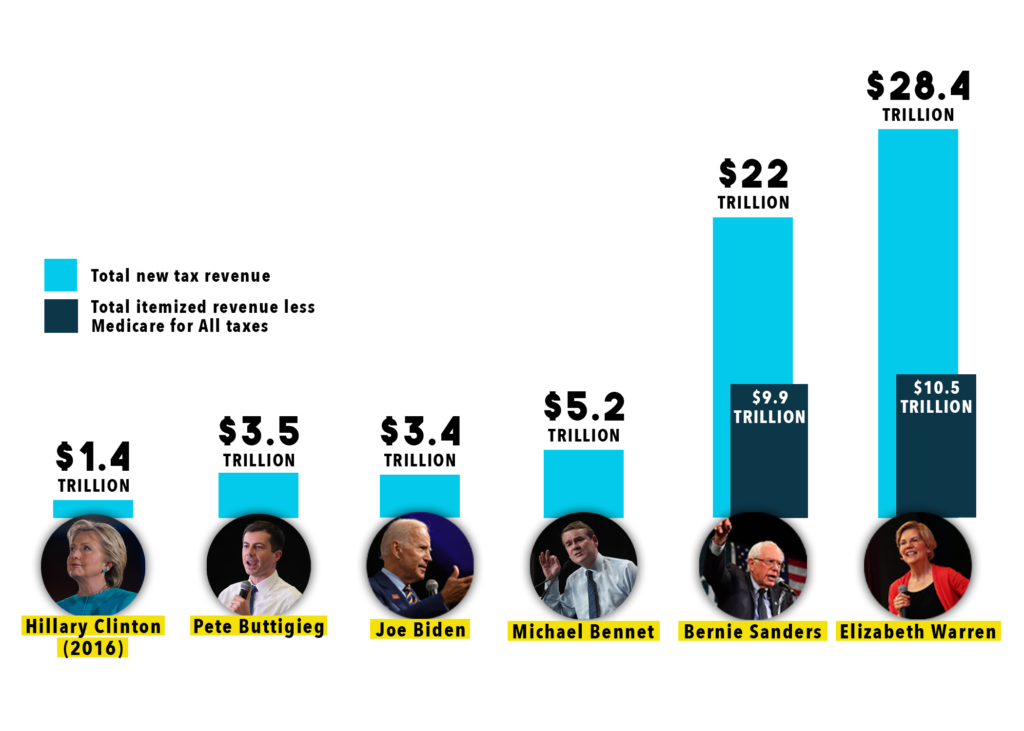 All four leading candidates for the Democratic presidential nomination have proposed tax and spending plans many times the size of Hillary Clinton’s fiscal plan in 2016, showing how far the debate has shifted in the progressive direction in four years. Like Clinton, they would all raise taxes almost exclusively on the wealthy and corporations to improve public services working families rely on like healthcare, education, and infrastructure.

Even the revenue and investment proposals of the two moderates in the top tier of polls—Joe Biden and Pete Buttigieg—are more than twice as ambitious as Clinton’s agenda four years ago. Meanwhile, Bernie Sanders and Elizabeth Warren are proposing fundamental transformations in the extent and means of raising and spending public revenue. A side-by-side comparison of the four candidates’ tax plans is available here and a summary table is below.

This universal embrace of progressive tax and spending policy by the Democratic leaders—and the complete rejection it represents of the trickle-down tax cuts and austerity budgeting of the past 40 years—heralds a historic shift in American politics that deserves broad coverage and in-depth analysis.

“’Fair share taxes’ as a demand has gone mainstream,“ said Frank Clemente, executive director of Americans for Tax Fairness. “Politicians have caught up with the public who for years have been telling pollsters they want the rich and corporations to start paying their fair share of taxes. This is why the Trump-GOP tax cuts are so unpopular.”

In conjunction with Tuesday’s last debate before the Iowa caucuses, and in the final days leading up to that first contest in the nomination process, we urge you to question all the candidates closely about this stunning change in political philosophy and strategy, and to prepare stories that explain it to America’s voters.

Clinton proposed upping tax revenue on the wealthy and corporations by $1.4 trillion over 10 years to pay for $1.7 trillion in public investments. Biden and Buttigieg have both offered up plans raising taxes on the rich and corporations by around $3.4 trillion, although both have made statements suggesting their totals could go quite a bit higher. Sanders and Warren are proposing around $10 trillion in high-income and corporate tax hikes, exclusive of the revenue they propose raising for their Medicare for All plans.

Notably, Michael Bennet, another moderate Democrat running for president, has proposed raising $5.2 billion from the wealthy and corporations to fund $6 trillion in new investments.

Among the specific tax proposals common to at least three of the leading Democratic hopefuls:

The comparison chart was created by Americans for Tax Fairness Action Fund from publicly available data, except for parts of the Sanders proposals, which relied on information supplied by the campaign.

ATF Action Fund also maintains a website that details the tax and investment plans of all Democratic presidential candidates.